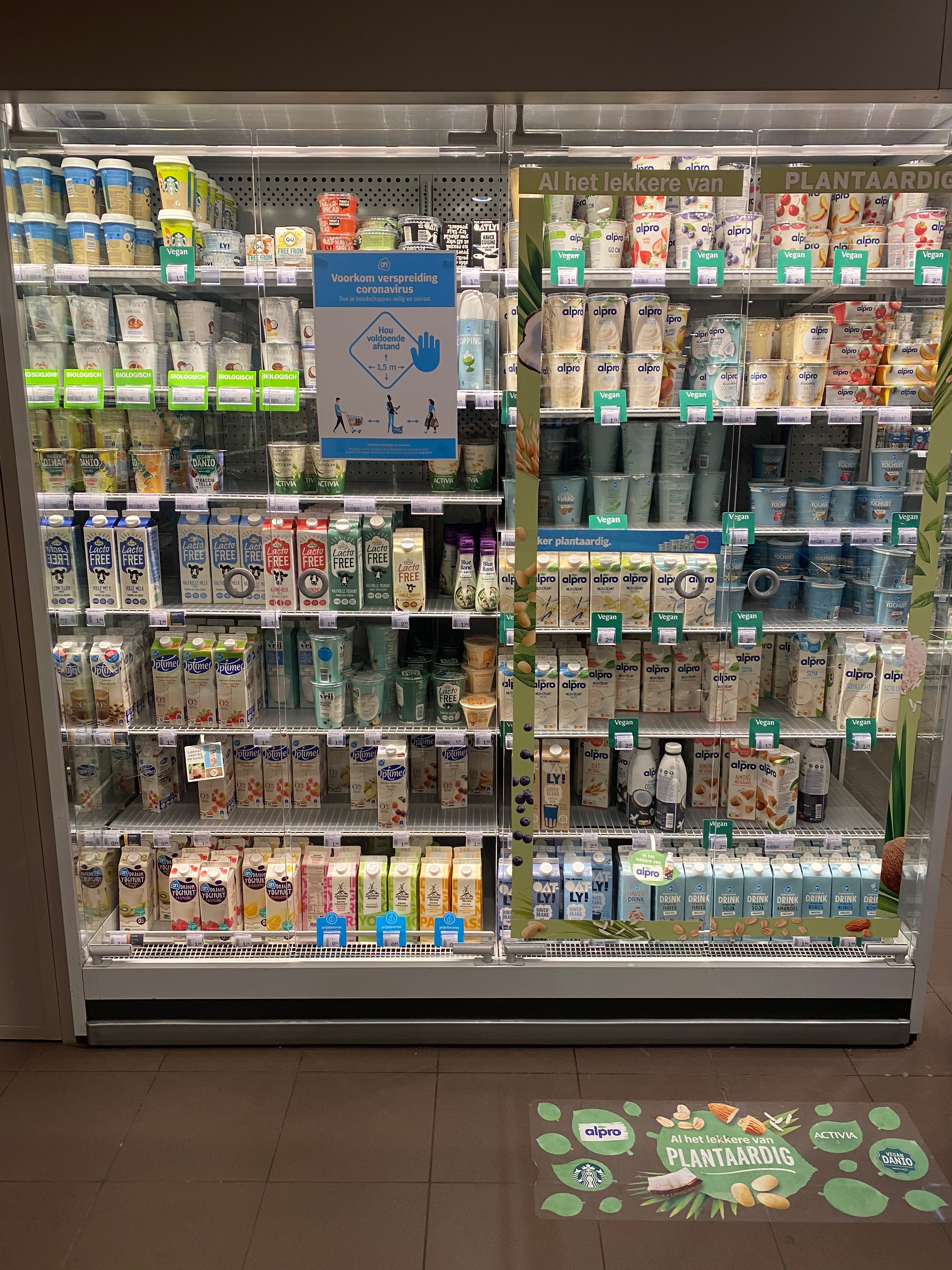 In times of corona, there is still plenty of vegan news. For example, in week 13 Albert Heijn introduced the first real vegan dairy shelf in the Netherlands. Vegan dairy in the refrigerated shelf has grown in recent years from a number of SKUs, to half a meter last year and now even to 2 meters in the larger and urban establishments (including the lactose-free range). You could now also call this the “free from” shelf.

Well, let’s have a look at what’s on the shelf. First of all, four new brands can be found (within this category): two well-known players from the animal dairy market, namely Activia and Danio. In addition, Abbot Kinneys (part of Wessanen for some time now) has been added as the real premium brand within the category. This is a local player that responds fully to the sustainable product demand and was previously only available at organic supermarkets. Finally, the dessert brand Gü has been added. This makes the first vegan desserts (including cheesecake) in food retail a fact.

In addition, Alpro naturally has a large number of SKUs on the shelf and Oatly is also an integral part of the list. The Oatly range has been expanded with the introduction of the vegan dairy shelf, which now includes spreads and creams. Albert Heijn’s private label range has also been largely expanded, including “yochurt”, “kwarq”, “variations to” (whipped cream, cream) and “desserts” (custard). Albert Heijn chooses names that are similar to the original or are quite general (such as dessert). AH also opts for the name “plant-based” instead of “vegan”.

The increase in oats is striking looking at the ingredients. Almost every brand has a SKU on the shelf. Not surprising, because in the US “oat dairy” increased by 686% in 2019 (Nielsen). The demand for oat products was mainly caused by the extremely popular Oatly. Activia cleverly responds to this trend with its packaging. An “oat yogurt” that only consists of 10% oats and actually is a soy yogurt product. Will the often more conscious customer looking for these products, like such a marketing ploy?

With this introduction, Albert Heijn again proves to be the frontrunner in the vegan market and draws attention to it with the current promotions in the Netherlands. Undoubtedly, this will make vegan diary grow even faster.